Did you hear about the Buddhist who refused Novocain during a root canal? He wanted to transcend dental medication.

A group of chess enthusiasts checked into a hotel and were standing in the lobby discussing their recent tournament victories. After about an hour, the manager came out of the office and asked them to disperse. “But why?”, they asked, as they moved off. “Because,” he said, “I can’t stand chess nuts boasting in an open foyer.”

A three-legged dog walks into a saloon in the Old West. He slides up to the bar and announces: “I’m looking for the man who shot my paw.”

Two boll weevils grew up in South Carolina. One went to Hollywood and became a famous actor; the other stayed behind in the cotton fields and never amounted to much. The second one, naturally, became known as the lesser of two weevils.

I’m doing the blog equivilent of treading water, but I have some real writing to put up tonight.

Two vultures board an airplane, each carrying two dead raccoons. The stewardess looks at them and says, “I’m sorry gentlemen, only one carrion allowed per passenger.”

Thanks to Mike Wallace for sending me this current batch.

I’m a real sucker for a good pun, and I have quite a few saved up, some original some not, waiting for that one time where the opportunity arises to just zing one in there. I mean, how often do you get to say “The trumpets were lost at C!” (rehearsal letter ‘C’)?. Anyway, here goes:

Two Eskimos sitting in a kayak were chilly, but when they lit a fire in the craft; it sank, proving once again that you can’t have your kayak and heat it too.

Let’s walk through 4 days in the life of Matt:

Sunday: If you were in traffic around seven PM on I-45, that was me. I was cruising along comfortable at around 70 miles per hour when all of a sudden the car starts shaking violently and making terrible noises. I manage to stop it, but unfortunately I’m in the innermost lane, and there’s no shoulder. Hazard lights are on, luckily no one hits anyone, but traffic is starting to pile up behind me. I get out and walk around the car to see what it is, it looks like my rear right tire has completely exploded, as seen in the pictures below. I’m already on the phone with AAA and they say they’ll put the call on “rush.” About fifteen minutes later, traffic is backed up a least a mile and I’m still sitting in the lane with my hazards on, waiting for the tow truck to get there so I can get out of traffic. A very kind man stopped behind us and said he would help us get over to the shoulder; next thing I know, he’s walking out on the freeway stopping traffic, and I manage to get the car to limp over to the right shoulder. I thank the man profusely when he comes over, and he asks if there is anything else he can do and then drives away. A few minutes after that the first tow truck pulls up, not AAA, so useless. Another one about a half an hour later, same story. I get back on the phone with AAA and they are no help at all, they say the call is being taken care of as fast as possible. More time passes, and by now we’ve been there at least a hour and a half, possibly more. Finally a third tow truck pulls up—I walked up tentatively hoping that this could be the one. He tells me he’s with AAA but he isn’t the one they sent, he just saw me on the side of the road and stopped. After another call he gets approval and fixes everything up just fine. However by that time my study group that was meeting at six was long gone.

Monday: I hope that this is the stupidest thing I do all year, but I am ashamed to say I actually ran out of gas. My gauge is erratic in its reporting, and I’ve had it be where it was today for a couple of days before, but today the car just stopped running. Luckily it was on a side street; unluckily it wasn’t in the best part of town. There was a gas station only a block away though, but they didn’t have any gas canisters. So Mat and I ended up carrying about a gallon of gasoline in various containers to and from the car until it had enough to start and actually drive to the gas station.

Although things were pretty bad, they could have been much worse. On Sunday I had actually left my cell phone at IHOP that morning, so I was without communication that day. (I did get the cell phone that evening; a manager had picked it up and nothing had happened to it.) Luckily Sarah had her cell phone and we were able to get in contact with AAA, even if their truck never came. Also the company was good, and the only thing that got a scratch on it is that tire. I’m ready to pick up and move to the mountains though :).

I laughed out loud at Shawn Yeager’s “Special Interests?” Read it outloud for the full effect. I just wish he had made it a bit bigger, and maybe used less compression.

I had the most terrible dream last night that I on death row and today at three I would be put to death. They were going to let me meet Tim-Berners Lee though, who apparently worked across the street from the place. I need to stop mixing late-night snacks with reading W3C specs. Anyway, tho thoughts of my mortality nicely dovetailed with an interesting article on cremation at Wired. I want to be the frisbee :). Warning: article is full of terrible puns.

You start thinking $ indicates the start of a string and ^ means the end in your regular expressions. (It’s actually the opposite.)

How better to learn about the proper use of apostrophes then from an angry flower? An appropiate follow-up to the smart quote script I just posted :).

I’ve just come across a comic artist who has some very biting cartoons that are really amusing to read. Although I disagree with many of his viewpoints, he presents complex ideas and thoughts with an uncanny editorial effectiveness. Also the quality of his drawings seems to be above what you normally see in the papers. Congrats on his Pulitzer Prize.

“It’s a sign of respect that someone sends you an electric business card. It means he wants you as a customer,” – open relays are bad. The people running the ISPs in question do have some valid complaints though, such as the manuals not being written in their language. It should be interesting to see where this story goes and if politics end up playing a part in it.

Unbelievable! I couldn’t make this stuff up: 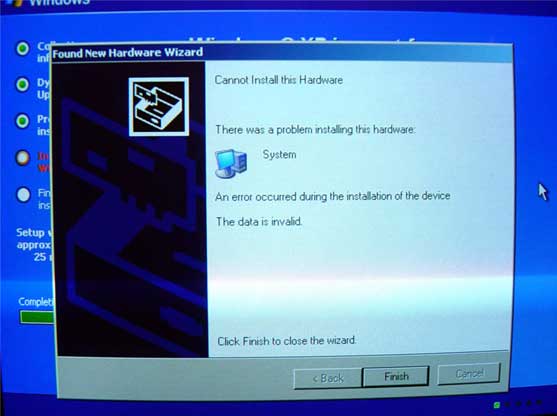 Yes your eyes are not decieving you. Apparently the genius known as Windows XP is having trouble installing the SYSTEM!! I’m typing so hard I think I might hurt my laptop, so I am going to stop now. Grrrrrr. Appparently, despite a small setback setup should complete in “9 minutes,” we’ll see.

Just when you think Mac users are smarter, something like this comes out.

Josh has a series of webcam comics up, very funny stuff.

Or perhaps I should say paws.

The President of the United States, George W. Bush, has asked that all Americans and Canadians unite together in a common action to root out terrorists hiding in our community.

Since the Taliban cannot stand nudity and consider it a sin to see a naked woman that is not one’s wife, on Saturday afternoon at 2:00 p.m., EST, all North American women are asked to walk out of their house completely naked to help weed out any neighborhood terrorists. Circling your block for one hour is recommended for this antiterrorist effort. All men should position themselves in lawn chairs in front of your house to prove that you think it’s OK to see other women nude. (Since they do not approve of alcohol, a cold six-pack at your side is further proof of your anti-Taliban sentiment.) Names and addresses of non-participants should be sent to CIA Headquarters, Langley, Virginia.

The United States of America appreciates your efforts to root out terrorists and applauds your efforts. Please, by all means, send this to your fellow Patriots to ensure 100% participation.

Thank you for your participation,
Bill Clinton, Former President of the United States